While many know of the legendary first attempt at a functional submarine in ''modern'' warfare, The short lived Confederate States Naval Vessel ''Hunley'', few now of another attempt. This was The ''Bayou St. John''. Much more primitive (in terms of it's design) than ''Hunley'', the actual Builder and design specifications are still unknown (due to the overall destruction of records during The War). The ''Bayou'' was though to have been built after The Fall of New Orleans, as a means of further resisting Federal Occupation and movements deeper into Louisiana via it's many riverways.

Found in relative good condition in 1908, when Bayou St, John (an estuary of Lake Pontchartrain), scant records found identified it's existence (but no official name). Hence, it was ''called'' The ''Bayou St. John'' – in honor of ''where'' it was found. Restored, The Vessel would become a (and still is) – a ''Museum Ship'' in Baton Rouge, Louisiana.

Made of Iron, The ''Bayou'' is 20-feet in length, with a Beam of 4-feet. ''Power'' was provided by a long hand-crank system, which spanned the entirety of The Vessel's interior. Crewing would have been (perhaps) no more than (8). For armament, The ''Bayou'' would have no doubt been a ''Spar'' Ship (or a type of early Warship which featured a long iron bar extension protruding for the front of The Ship, onto this which was attached an explosive device or ''Torpedo''. Detonated by a rope or wire upon contact, the detonation of which was almost always lethal for The Crew of the attacking Ship as well). 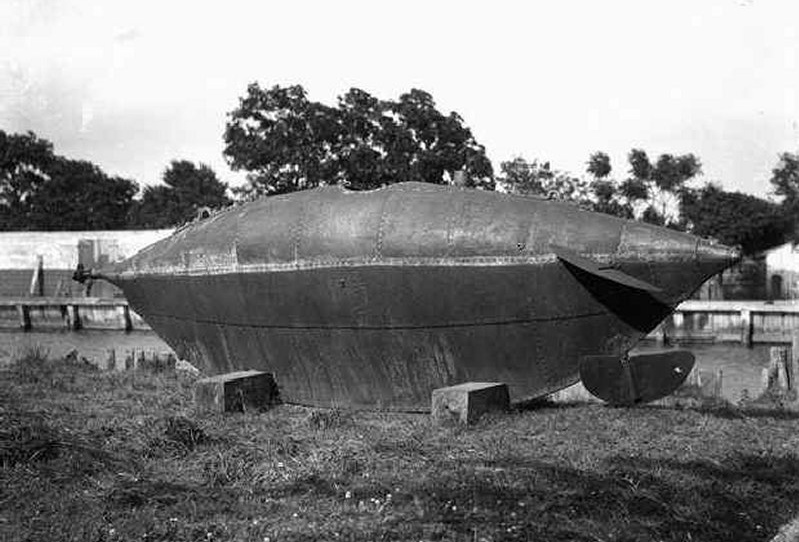