Assigned to The Confederate Army of Northern Virginia and mustered into service in 1861, The 6th Virginia Regiment (also known as The ''Mountain Guard'') numbered 670 Officers and Men – mostly recruited from The Norfolk Area of that State. It saw numerous skirmishes but only fought in (6) major Battles of The American Civil War. It's last major engagement was at Gettysburg (Pennsylvania, 1863). In this epic battle, The 6th lost 30% of it's number during the ill-fated ''Pickett's Charge''. The Regiment surrendered with General Lee's Army in 1865, with only 110 Officers and Men surviving.

The Regiment started The War somewhat ''out of Regulation'' with regards to Uniform appearance, with most of The Regiment donning a Russet (Red) ''Hunting Shirt''-style fatigue Jacket. Many still retained these until Gettysburg. The Regiment, as did all other Army of Northern Virginia Units, flew The Battle Flag or ''Southern Cross'', with Regimental Identifier. 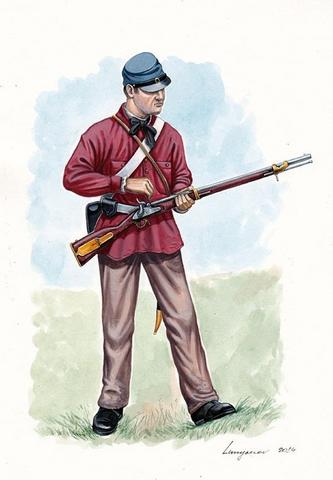