Formed in 1861 at the beginning of The American Civil War – The 5th Texas Cavalry was only one of two Civil War Regiments (The 6th Pennnsylvania in The Union Army being the other) – that actually fought using The Cavalry Lance. At it’s height of recruitment, The 5th Texas had 3,000-Troopers. They were commanded by famed General (and designer of The Sibley Tent) – Henry Sibley, The Regiment fought primarily in The New Mexico Territory. The goal of The Confederacy was to take the Territory, which would threaten both Nevada Territory’s Silver and California’s Gold outputs.

Although most European Armies still maintained Lancer Regiments (as did many South American Nations), the warfare style  of The Lancer never truly took hold in The American Army. Those that were raised were used mostly as ceremonial Units. The last real attempt at using Lancers in combat was during The Mexican War of the 1840s.

During The Battle of Valverde (NM Territory) 1863, The 5th Texas made a bold Lancer Charge against Union reinforced positions (supported by Artillery). 600 of the 1,800 engaged would fall from the saddle – losing the battle and a major attempt at control of The Territory.

While The Lance was considered a primary weapon, The 5th Texas carried Saber, Carbine and Pistol as well. The majority of their engagements were fought as traditional Cavalry. Badly decimated by the end of The War, some still survived to be with Confederate General Robert E. Lee at Appomattox for the surrender of The Confederate Army in 1865. It was said that they formed The General’s Honor Guard, but Historians still debate that they were still using Lances by this point. 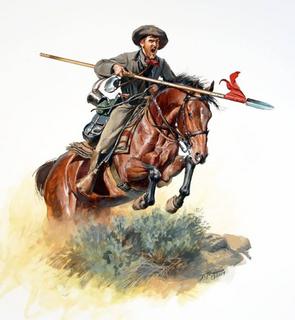