A “Novelty Gun” invented in France in 1859, The Harmonica Gun got it's name from the unusual side sliding ammunition clip (magazine) that fit into it's side. In theory, the slide would be fitted with 10 rounds of .58 caliber balls, as the shot was fired (via a percussion cap), it would fire. The shot was self contained with powder. The shooter simply moved or slid the clip to the next shot, replaced the cap and fired again. Not many were obviously made, but some did make it through The Federal Blockade during The American Civil War – and saw some limited service. A Pinfire version was also made. 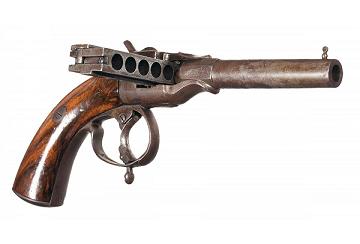