Also known as The ''Palmetto Guards'', The 2nd South Carolina Regiment was formed to fight for The Confederate States of America, during The Civil War of 1861-1865. (10) Companies of Infantry numbered roughly 1,000 Officers and Men. It was one of the first Volunteer Regiments formed after The Bombardment of Ft. Sumter (South Carolina), which began The War in April of 1861.

Assigned to The Army of Northern Virginia, The Regiment fought in almost (20) major Civil War battles and uncounted skirmishes during it's service. The 2nd South Carolina is best remembered for one of it;s soldiers, Sergeant Richard Kirkland, nicknamed ''The Angel of Mayre's Heights''. The Heights were a predominant geographical feature at The Battle of Fredericksburg (1862), in which heavily emplaced Confederate Guns repulsed (15) Federal Infantry Charges. The wounded and dead Union soldiers strewn the battlefield. Crying for water, Kirkland moved through the field giving water and medical aid as best he could to the ''Enemy'' soldiers. Kirkland would die at The Battle of Chickamagua a year later at the age of 20.

Detached to The Confederate Army of Tennessee, The 2nd Regiment would fight at both Chattanooga and Chickamagua. Suffering massive casualties in both engagements, The 2nd South Carolina survivors were consolidated with The 20th South Carolina and detached to General Joseph Johnson's Army in North Carolina. They surrendered with that Army in 1865.

The Regiment wore the regulation Confederate Cadet Grey wool uniform, some with Kersey Blue Trousers, others Grey. In the beginning of The War, The Regiment used The State Flag of South Carolina (as many Carolina Units did) – as their Battle Standard. 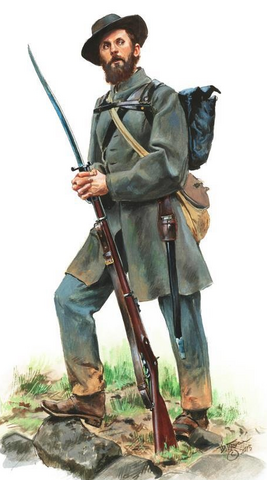