Organized at the start of The American Civil War in 1861 - The 2nd Florida Volunteers enlisted to fight for The Confederacy. They were attached to The Army of Northern Virginia (under command of General Robert E. Lee). The Unit fought in 11 major civil war battles, to include the ill-fated Pickett's Charge at The Battle of Gettysburg (1863). By 1864, due to troop losses - the 2nd Florida (along with several other Florida Infantry Units), were merged into The Florida Brigade. The Unit continued onward until they surrendered at Appomattox Court House (Virginia) - in 1865. Florida, apart from furnishing quality fighting men throughout American history - she stood as the only Confederate State Capital that was not captured by Union Forces. 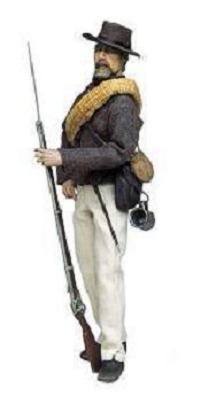