Raised for service with The Confederate States Army in 1861, The 1st Virginia Cavalry was assigned to The Army of Northern Virginia , and commanded by famed cavalry commander Major-General James Ewell Brown Stuart (Jeb). Their exploits were legendary on both sides of the war. The Regiment participated in 14 major battles. Originally, all Troopers rode black horses, but this practice stopped with The Confederacy having problems with replacing them. Known, also for their black striping on their uniforms, Regiment was considered to have some of the finest cavalrymen from The South. The 1st Virginia participated at The Battle of Gettysburg (1863), and lost some 330 Troopers.

They would lose their famed commander (Gen. Stuart), at The Battle of Yellow Tavern, Virginia - when they went up against another legendary cavalryman, General George Custer. Towards the end of The Confederacy, At Appomattox Court House (1865) - Lee's Army was surrounded (which prompted his surrender). Still, the only unit that was able to break through the numerically superior Union lines - where The 1st Virginia Cavalry. 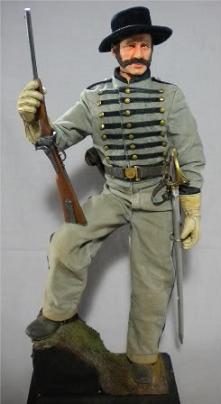