The 1st Texas Infantry Regiment was a Regiment raised by The Confederate States of America – in response to The American Civil War. The Regiment was formed in Richmond, Virginia – but was composed of (10) Companies from various Counties within The State of Texas. At the start of The War in 1861, The 1st Texas had close to 500 Men. They were part of General John Bell Hood's ''Texas Brigade'', and attached to General Robert E. Lee's famed Army of Northern Virginia.

The Regiment served no less than (18) Major and Minor engagements. They were present at Gettysburg and at the end at Appomattox Court House (1865). The 1st Texas has the sad honor of being the only Regiment, North or South – to suffer 80% battle casualties, in a single engagement. This was early in The War – at The Battle of Antietam (Sharpsburg), Maryland. The Regiment was positioned at the infamous piece of ground known as ''The Cornfield'', remaining in place under heavy Artillery and Musket fire from The Federals. This earned them the nickname of ''The Ragged Ole First'', for their shattered appearance after the battle. Again, at Gettysburg (Pennsylvania), The 1st Texas stood their ground and repeated assaulted the Federal Positions at Little Round Top. The 20th Maine defenders inflicted close to 70% casualties to The Regiment that day. They were eventually reformed and surrendered in 1865 with fewer than 180-Men.

The Standard carried by The 1st Texas was based on The Texas State Flag. This featured a pair of horizontal stripes, White over Red – which occupy the majority of The Field of the Flag. The Left Canton is extended to cover the entirety of the left quadrant and is a Field of Blue. Centered within this Field is a large single White 5-pointed Star. As was common with both sides during The War – the place names of particularly important battles were often stitched onto The Flag at points. The 1st Texas did this as well. 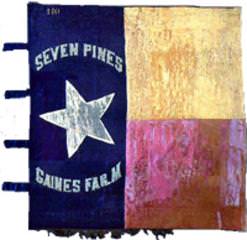