Adopted by The Confederacy in 1861, The Stars and Bars was the official National Flag (The ''1st National Flag''). It's first version featured 7 white stars in the upper left quadrant of the flag, arranged in a circle. 3 horizontal stripes of equal height, encompassed the remainder of the flag (1 red, 1 white and 1 red). Subsequent versions featured 13 stars. A common problem with The Stars and Bars, was that when it was carried on a windless battlefield (hanging limp) – and from a distance, it somewhat resembled the flag of The United States. This would cause confusion on the battlefield with regards to troop placement (especially on a smoke filled field). This flag was replaced in 1863 by The Second National Flag. 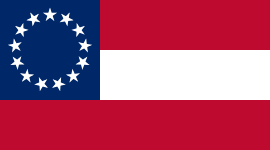