The 1st Louisiana Volunteer Infantry Regiment - nicknamed The Louisiana Tigers, were formed to fight for The Confederate States of America, during The American Civil War (1861-1865). Most members were "foreign born" (mostly Irish). Most were recruited from Ports and Harbors in Louisiana, and these men had a reputation for toughness. In addition, most had some experience in local Militias or other military service. Known for their distinctive French Zouave uniforms (which were popular on both sides during the very early period of the war's start). When most of these uniforms were replaced for the more traditional "gray or brown" the Confederacy wore - the Tigers kept theirs.

The Tigers were assigned to General Lee's Army of Northern Virginia. They fought in many battles in Virginia and were also a part of General "Stonewall" Jackson's "Foot Cavalry" in The Shenandoah Valley for a time. The Tigers suffered heavy losses during The Battles of The Wilderness and Spotsylvania in 1864. The survivors of The Tigers were incorporated into other Units at this time. Of note, those few survivors of The Tigers would go on to help after the war  in the abortive Fenian Invasion of Canada in 1866. 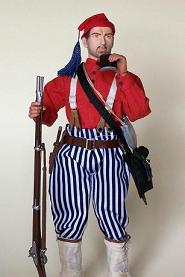