A Formation of The Confederate States Army (1861-1865) – during The American Civil War, The 1st Georgia Sharpshooter's were formed in 1862 – in The City of Savannah, Georgia. They were designed to counter their Federal Version, The 1st United States Sharpshooters. As such, every Man recruited had to prove His ability as a ''crack shot'' prior to being accepted into The Battalion. Additionally, as with their ''Yankee Counterpoints'', The 1st Georgia wore all Green colored Uniforms, to better ''blend in'' with their surroundings. At their height, The 1st Georgia numbered 800 Officers and Men.

Fighting in most Major engagements of The Western and Southern Theater of The War, The 1st Georgia earned their Elite status at The Battle of Fort Sullivan, Georgia (1863). With The Fort under direct attack from (8) Federal Ironclads, The 1st Georgia (using their shooting skills), engaged The Federal Warships – inflicting so much damage – that The Warships broke off their attack! Sadly, as with their Northern Counterparts – Sharpshooters were seldom used as intended. Mostly, they fought as Skirmishers and Scouts. The 1st Georgia would fight at The Battle of Atlanta (1864), suffering over 50% casualties. They would surrender with General Lee at Appomattox in 1865, barely 30 Men surviving. 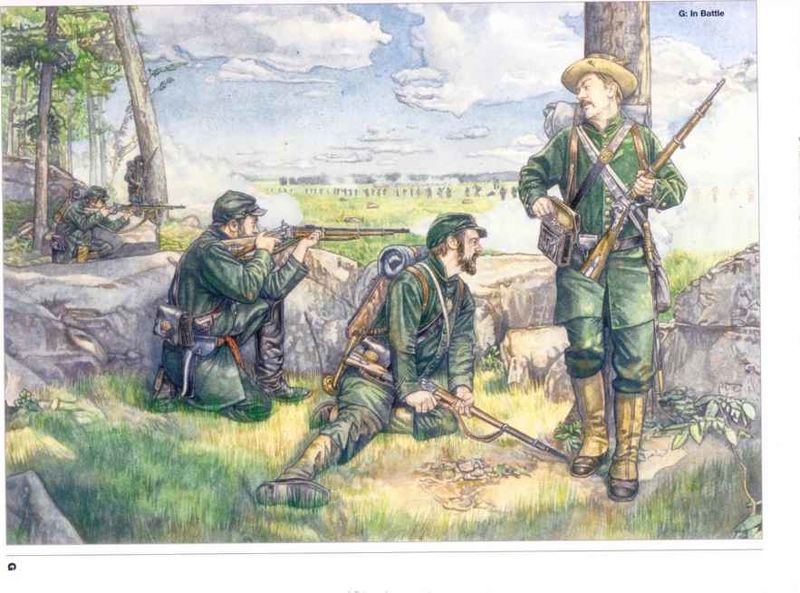