A seldom researched Regiment of The American Civil War of 1861-1865, The 1st Florida Special Cavalry was form during the last years of The War (1864), with an important Mission. The protection of cattle herds from Union Raiders within The Confederate State of Florida. Although One may think of Texas as being the ''Land of Steers'' (for cattle production) – oat one point in History, Florida held that title. During much of The War, many Federal Expeditions had been formed to seize The State (seen as also being the prime producer of Salt, needed for meat preservation). Many of these attempted incursions failed (for one reason for another). While most Florida Forts (once Federal Garrisons), had been re-captured and several large scale battles fought, much of The state remained in Confederate hands until the end of The Conflict.

To protect much of the Beef Herds (gathered in the mid-Northern portion of The State), a Regiment of Volunteer Cavalry was formed. Numbering around 800 Officers and Men, the dubbed ''Cow Cavalry'' were very effective in protecting cattle from several Union attempts at capture. In addition to overall protection, The Battalion also were composed on many former Drovers (experienced Cow hands), who could move The Herds to The East Coast of The State, for eventual transport North (where meat was badly needed). The ''Cow Cavalry'' remained a Force until the end of The War in 1865, where it surrendered to Federal Forces at Fort Myers, Florida. 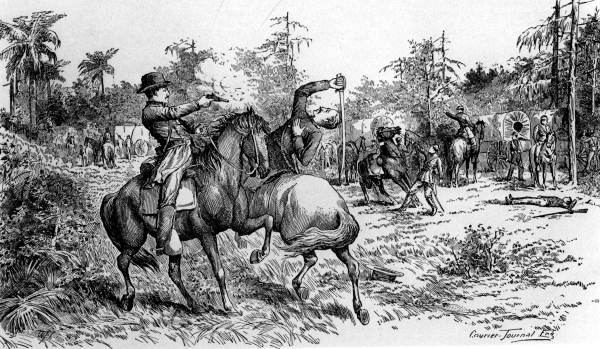