Raised in Austin, Texas in 1862, The 17th Texas Infantry mustered (10) Companies of 1,100 Officers and Men in support of The Southern Confederacy during The American Civil War of 1861-65. The Regiment spent it's entire career with The Army of The Trans-Mississippi - 2nd Corps. Sent to Winter in Arkansas – The 17th lost 300 of it's enlistments to disease. After which, they were sent to participate in The Battle of Pine Bluff (also in Arkansas). However, winter thaws made fording nearby rivers impossible and The Regiment did not make it. As a result, they were not captured with some 4,800 others (spending the duration of The War in a Union POW Camp).

The 17th was sent to help lift The Siege of Vicksburg (Mississippi) in 1863, but were unable to break thru and join Confederate Forces there. They later participated in many small scale skirmishes and engagements, as well as The Red River Campaign. In 1864, The Regiment was deployed to Shreveport, Louisiana – mostly to garrison the already shrinking Confederate Military presence there. They marched back to Texas in 1865 and surrendered to Union Forces in Hempstead. Their losses were recorded at 230 Officers and Men killed or wounded in The War. 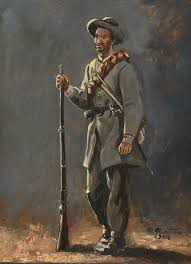