Long a fixture of Western Lore, The “Conestoga” Wagon was in reality not part of the mythos of Western Migration. In fact, The Conestoga Wagon was a major component of Early Colonial American transportation. Said to be named for Conestoga County in Lancaster, Pennsylvania (from where the first Wagon was constructed in 1717), these were massive vehicles, which required the use of Oxen to move – in the beginning.

Requiring up to 8 Oxen, The typical Conestoga Wagon weighed 6-tons, was 10-feet long and 10-feet high. They could carry up to 12,000 pounds of cargo. Made of wood, the distinctive feature of The Wagon was it’s curved, “boat like” Front or Prow. A series of wooden looped extensions composed the skeleton-like Upper frame. Upon this was stretched a Canvas covering. The wheels of the Conestoga Wagon were made of wood, with the outer rim covered in lead or steel (to protect them from excessive wear).  The Conestoga Wagon was not meant to be ridden upon, although a specially designed board was installed inside The Wagon called a “Lazy Board”. A Driver could ride in a compartment too control The Oxen Team. Traditionally, a Driver was required to walk beside The Team as a “Guidesman”.

The overall weight of The Conestoga Wagon precluded a Horse from being used. In tine, a specially bred Breed (based on The Arabian Horse), was created for exclusive use. These would be known as The Draft Horse  (a large, hefty and robust Breed of Horse). Replacing The Oxen Team, these were seen towards the late Appalachian and Ohio Valley Migrations. The Conestoga Wagon would be used until 1864, when the somewhat lighter and more versatile “Covered Wagon” seen during The Westward Migration. 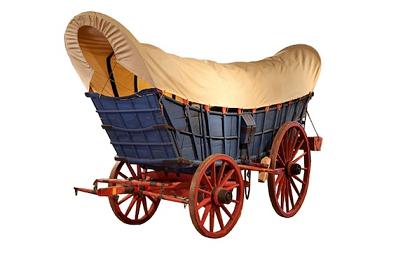