Derived from much more ancient sources (Greece, for one), the so-called Comb Helmet was developed in the mid-18th Century. By the 19th Century, it was the predominate protective headgear throughout most of Europe. Used mainly by Cavalry Forces, The Comb Helmet was so named due to the raised extension incorporated onto the Crown of the helmet. The Comb, it should be noted, served no military purpose and was decorative only. They could be several inches to as much as 7-inches tall. Comb Helmets were widely constructed in the same manner. Form fitting, they could be made of Pewter, Brass, Iron, Steel or even reinforced Leather. A visor brim of varying lengths was also used. The back of the neck may or may not have a extension plate.

Highly polished and often embellished with plumes of varying materials. They also featured various military ornamentation. Comb Helmets may or may not feature a chin strap. The interiors of the helmet was constructed of different materials as well. Fitted cork, leather straps, even cloth was used as a "fitting agent". Comb Helmets became a popular component with Heavy Cavalry Units (such as France's Currassiers). They also served as inspiration for several other specialty helmets in the 19th Century. They are still seen in use by many Ceremonial Units. 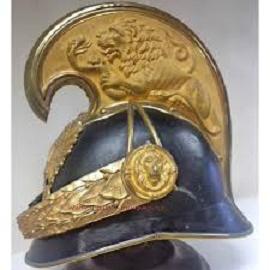