The ''Warhorse'' known as ''Comanche'', led a life so shrouded in myth and legend – that much of his ''truth'' has been greatly exaggerated. It is Comanche which is often credited with being the ''only'' survivor of Lt.-Col. George Custer's ill-fated Battle of The Little Big Horn (The Plains Indian War) in 1876. While there is truth to this statement – much can be told as to ''why'' the myth became bigger that the Horse.

Purchased in 1868, Comanche was a 60-inch tall (15 Hand) Bay Dun breed, which was sent by The US Army (Cavalry), out West to Fort Leavenworth (Kansas). Spied by US Army Officer Myles Keough of The 7th Cavalry, he saw great potential in the animal and had him assigned to him. His only requirement was that Comanche only be used on active Combat Patrol and not routine Cavalry duties.

After the horrific Battle, which (as is known) – lasted only 19-minutes and cost not only the life of ''General'' Custer, but all 256 in his Command, almost every other Horse in The Command had either been killed outright, or captured as a Trophy by Sioux and Cheyenne Warriors. In Comanche's case, he was shot so many times by both bullet and arrow, that it is still unclear exactly how many times he was hit. Two days after the engagement, General Alfred Terry's Relief Column found the battlefield. Off near the banks of The Rosebud Creek was Comanche, resting on his haunches, bleeding profusely and bristling with arrows. It was determined that he was truly the only ''survivor'' of the battle and had to be saved. Taken back to Fort, it was indeed a miracle that – while the wounds were serious, Comanche nonetheless survived them all.

Comanche spent the next 15 years still in service with The US Army as a Ceremony Horse and a bit of a celebrity. Every young schoolboy that knew the Story of Custer's ''Last Stand'', knew the Story of Comanche. As a Ceremonial Horse (still assigned to The 7th Cavalry, he was used in funeral details and other commemorations. He was even assigned his own ''Orderly'' to care for him. However, after 15 years, The Orderly retired. Comanche was given a new Orderly, but the horse seemed to ''grieve'' the loss of his companion. He died in 1891. In this, Comanche's story begins.

Reading of the death in a back East Newspaper, a noted Naturalist asked if he could preserve Comanche (at a cost of $400). Officers of The 7th agreed – and Comanche's hide and bones were carefully taken back East. Later, seeing the possible potential for preserving History, The Naturalist told the Officer's he would wave his fee if Comanche could be placed on permanent display at The University of Kansas. They agreed.

Thousands over the years have come to him. However originally, Comanche was able to be touched. Years of poor climate control and touching of his hide (as well as insects) – wore down the old Warhorse by the 1920s. Comanche was re-conserved over the years and eventually placed inside a sealed glass, climate controlled case. He still stands today, now the true ''last survivor'' of The Battle of The Little Big Horn. 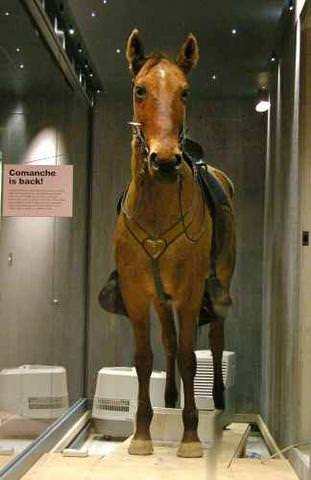