Invented by Army Colonel George Bomford in 1811, these large caliber cannon were the workhorse's of siege and Coastal defense in the US arsenal. Designed to fire solid shot and long shells, The Columbiad Gun survived up to the 20[sup]th[/sup] Century. The gun saw little overseas service (in sales) and was used heavily in both Union and Confederate service. The Columbiad was capable of firing a 65-pound shell some 4,400 yards (with 128-pound versions capable of 6 to 7,000 yards). Often mounted on traversing rail systems, The Columbiad Gun had an excellent rapid positioning system (in some cases being able to be traversed 360 degrees).

Although often confused with The Dahlgren Gun (which feature more and bigger calibers), a 400-pound shell version was built (but was never used). Rodman Guns (developed by another maker), are classified as Columbiads. The Confederate Coastal Services exclusively used Columbiads against the Union Navy's ironclad River Fleets (with somewhat good effects). The Confederacy even experimented with rifling some Columbiads (for range). The Spanish-American War of the late 1890s was the last official conflict which saw Columbiads in use. 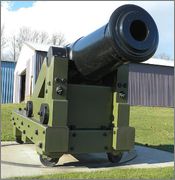