Colonial Flag of The Spanish Empire

At it's zenith, The Empire of Spain was one of the largest in the then known World. It's Colonies stretched from Oceania (Pacific), to The Americas, Africa, Asia and Europe. Designed around 1506, The Flag of The Empire is often known as The Burgundy Cross Flag. The entirety of the flag is white. A large red cross (similar to The St. Andrews Cross of Scotland) – extends from end to end. The difference with the cross is that each bar has a resulting barbed extension (similar to a razor). The Imperial Colors (as such described) remained more or less the same until it was replaced in 1843 (although it still appeared as a battle flag by Spanish troops on occasion, thereafter). A yellow field with red cross version was designed (and used briefly) – in the 16th Century. The Imperial ”White” was a standard sight throughout the World (on land and sea). It has been adopted (in whole or part) – into many other National Flags and Banners. Many US Southern States (who were at one time under Spanish Control) – still incorporate a modified Burgundy Cross into their State Flag design. 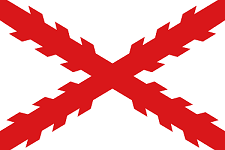