An Ancient piece of clothing relating to The Coronation of a King or Queen (especially in Medieval England), The Colobium Sindonis ) ”Shroud Tunic” was a plain (White) Gown which had no adornments or sleeves. It was worn over the Head and draped downward. It’s use was to symbolize the divestment of One from all “Worldly Goods” or “Wants”. Once Anointed, The Sindonis was placed on – with all other Robes and Regalia placed over. The first use of The Sindonis is traced to William The Conqueror (9th Century). His Sindonis was used as a formal piece for Coronation until it was destroyed by Parliamentarian Forces during The English Civil War. Since that time, a new Sindonis is made for each separate Monarch. 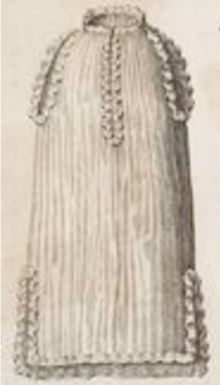