Seen in Germany towards the end of the 17th Century, this was a “transitional Rapier” type weapon. Lighter and better suited to parrying techniques, the Colichemarde had a thing blade that gradually tapered bade to a normal Small Sword blade width. A popular weapon with Royalty, it was first documented in 1680. The weapon was also seen in great numbers during The French and Indian Wars in the American Colonies.”Major” George Washington even owned one. It was used quite extensively as a Fencing weapon as well. The weapon (like the Rapier), had no edge and was used as a thrusting/stabbing device. The average blade was around 40 to 45 inches long. They could be carried in specially designed scabbards. 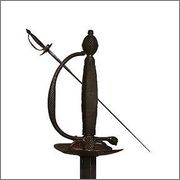