Located in Conisbrough, South Yorkshire, England – Conisbrough Castle is an 11th Century defensive structure built under commission of William The Conqueror. Said to have been controlled by a illegitimate Son of King Henry II, it was originally a wooden Motte and Bailey construction. Rebuilt in stone by the mid-12th Century, Conisbrough is considered a “Spur Castle”. It's predominate feature is it's 90 foot Central Keep (located at the rearward of the Motte. The surround 8 to 12-foot thick Perimeter walls did not feature the typical Defensive Tower system one would assume existed. A Front Entrance Way (Portcullis) was reinforced by twin Round Towers, only. Owing to the elevation of Conisbrough (175 feet), this was given as enough in the way of “defensive” protection. Several interior structures may also have existed (Chapel, etc) – but only foundations remain. By the 17th Century, much of Conisbrough had been reduced to ruin due to lack of Ownerships and the needed repairs. It was because of this that Conisbrough was overlooked by Cromwell as a possible defensive postion during The English Civil Wars. However, it's general appearance and “atmosphere” was said to have inspire English Writer Sir Walter Scott for his Novel “Ivanhoe” (1819). Taken over by The State in the 1950s, much was done to renovate Conisbrough back to it's 14th Century appearance. In the 1990s, extensive work was done to the Central Keep (roof and flooring). The Keep consisted of 4 floors (originally). It is still a popular spot for Tourism. 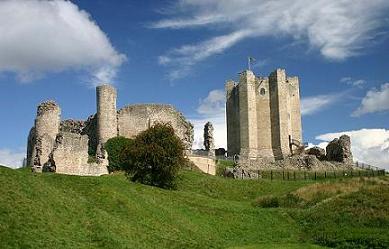