As we have previously discussed, the primary goal of a Shield, was to provide protection from various weapons, as carried by either Ground or Mounted Forces. In The Middle Ages, Shields were a critical component in battle. Various types were developed (according to Region), and were constructed based on the type of warfare (tactics used) as well as weapons involved. One style seen in Central Europe for a time wad the aptly named "Coffin Shield". It developed from the fierce Western Germanic Tribe, The Visigoths. It's actually name of "Coffin" was coined much later in history by French and English soldiers. First designed around the 8th Century AD, The Coffin was said to have been based on Roman design.

Much lighter, Coffins Shields featured a hexagonal shape. Constructed originally finally from a wooden frame, thin iron plate was affixed to the front. The Shield's interior (facing the User), wad deeper than a traditional Infantry Shield. They featured a double set of leather straps which were designed to wear "high or low" on the forearm. The Coffin Shield was better suited to Mounted Troops. On average, Coffin Shields were 3.5 to 4-feet in length and 3 feet in width at the Upper center (or strike area). With French and English contact with these Shield types, it wad noted that they bested a striking similarity to the "lid" of a Coffin. In a form of "gallows humor" Medieval French soldiers first took to calling them "Coffin Shields" ( possibly as early as the 13th Century). 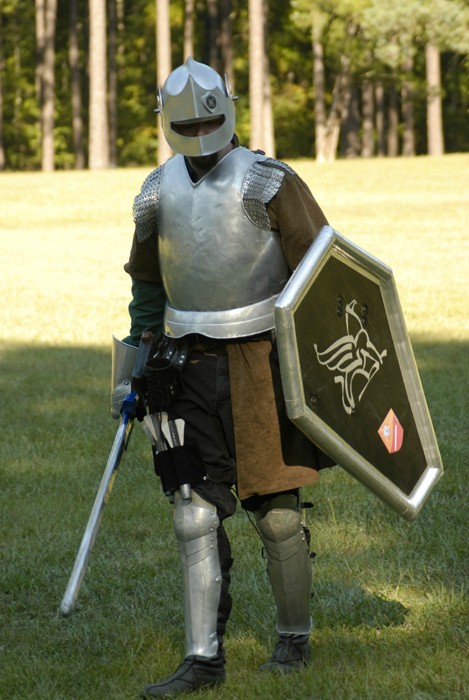