The Coehorn Mortar design was developed to provide a light weight, siege and offensive artillery piece that could be readily deployed and fired by soldiers in the field. The design of The Coehorn was first seen as far back as the 13th Century (with the advent of primitive cannon and bombards). In it's much later evolved use, The Coehorn was a single cast iron tube. Weighing around 200-pounds, they were mounted on wooded carriage boxes. Given the ability to be moved up and down for elevation simply by “moving and setting the small tube), it took 4 men to fire. The Coehorn was able to for 12 to 24-pound Shot. The weapon was very popular during The French and Indian, Revolutionary and American Civil Wars. Coehorns were not always deployed by Artillery Units (whereas trained Infantry could deploy as well). They had an effective range of 400 to 800 yards. The Coehorn was the true ancestor to the Infantry Mortar. 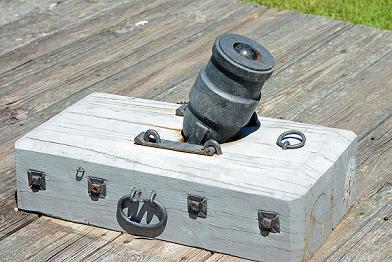