The “Code of Chivalry” is an ancient “Rule”, that all Knights were expected to follow. Not just a mere “Oath”, Knights were to live and even die by their Code. Often bestowed upon them through an elaborate Ceremony, The Code was written, but not “signed”. A Knight's “honor and Word” sufficed as his affirmation of The Code. Often strict rules governing it's use were in fact written (and could be “judged” within a “Chivalry Court”. In The Middle Ages, most of The Code was based on Noble traits.
The Code of Chivalry was as follows:

Often “sub-Rules” weer added (and quite possibly by Medieval Writers). “Courtly Love” being the most cited. Many of the “secondary Rules” made their way (or vise versa), into popular Medieval “stories” (King Arthur, Roland, etc) In terms of the “Bestowment Ceremony”, it was most often patterned after the various Monastic Orders of the Era. Often, a “pending Knight”, (after MANY years of practice and training) – would present himself in a Chapel (with his Armor and Sword). Placed before an Altar, he could be expected to “pray” for “guidance and a pure heart” - ALL NIGHT. After which (in the Morning), the Knight would be dressed in his “battle garb”, and taken before The King or Queen. Kneeling, he would recite his “Oath of Loyalty”. Upon this, The Monarch would (either using The Sword of State or even the Knight's Sword) – would gently “touch” both shoulders (and later the top of the head). This Act, was (in the 13th Century), given a spoken “formula” for bestowing Knighthood (“In The Name of God, St. George and St. Michael.....I Make Thee a Knight of The Realm.”) 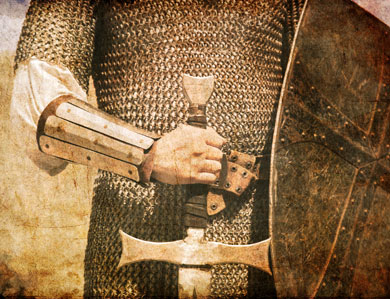