The development of The Coatee was seen in the mid-18th  Century  in Europe, as a replacement to The Long Coat. Noted first it’s shirt Front (to the Waist) and firm fitting appearance, The Coatee was characterized by it’s long rear Tail extensions. By way of example, American Patriot Forces so named their British Enemies “Lobster Backs”, in part – due to the Red color of their Coatee and the split of the Tails (resembling the Crustacean). Made of heavy wool or a related blend, The Coatee was colored according to the needs of the particular Branch or Service requirements. Embellishments were similarly varied.  Often, multiple rows of Brass or Metal Buttons were used, with often only the Center Row being the actual point of fastening. Piping was also heavily used. Used until the early 19th Century, The Coatee would also develop into a dominate Civilian Male fashion Outer Garment. 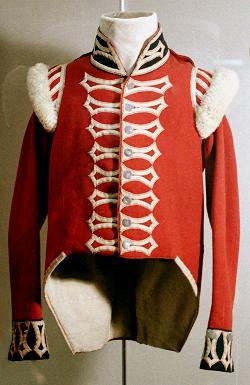