As previously mentioned, Commoners  (or Peasants), wore a type of clothing known as "Coarse". It's 11th Century meaning was similar to today's word. Crude of material (not fine or processed), and rough to the touch. In most cases, Coarse was the product of unused or unwanted wool and latter cotton-like fabrics. "Homemade" into simple patterns, both men and women wore it. Dying the Coarse was also something that common folk did not do. The creation of bright colors and the subsequent process required to produce the color wad expensive. Normally simple Greys, Blacks and "Earth colors", were seen.

Women wore a firm , of simple one-piece, over the head "gown" - placed over a simple White Muslim dress (or "Sack"). Buttons and wooden fastening "toggles" were also seldom seen (often only cinched at the top with string or leather strips). Men wore a Tunic which harkened back to the Roman Tunica. Often open at the front, it too was cinched with a belt of similar cloth or leather as well. Leggings, Gosset's or related - were worn as high as the groin. Depending on the Region, the Ancient Brace (or trouser) was still incorporated.

Ideal in Winter, but horrible in Summer, both styles may or may not have featured sleeves. Clothing for Peasant's were as well cared for as was possible - and in many cases even "passed down" after death! Little is known beyond these facts of Commoner clothing. Whereas the wealthy were better "prepared" in death, much of their fashions have actually survived the centuries (as Grave Goods). Commoners were often consigned to the grave in simple "Shroud Sheets" with very little (if anything), surviving.

Medieval Art and some contemporary documents gave helped a great deal as have the rare archeological finds (The Bog Bodies, by example). Coarse material and styles would continue well into the 14th Century. With the changing of the Serf and Fifedom Class systems, a somewhat better "way of life" would give way to somewhat "better" clothing choices and materials. 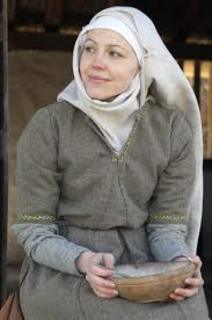