Seen in the 18th Century, Clipper-Class ships were traditionally 3-Masted and featured squared rigging. These were noted for their speed. Slender without great width, their name derives from “Clip” - which meant “swift or fast” (on average 20 miles per hour). In addition, when the ship sailed – it appeared to “clip” the water. Clippers were among the first cargo-type vessels preferred by American Merchants for cross-Atlantic trade. Other than speed, Clippers do not have a specific characteristic in design or construction. Clipper-Class ships were also used (when modified) for Privateer missions during both The American Revolution and The Civil War (by Rebel Blockade Runners). Although not generally armed, small Swivel Guns could be mounted on their decks for protection. Clippers rarely displaced more than 200 tons. Clipper-Class ships also featured predominately during The Chinese Tea Trade (exploited by both England and American traders). These ships acquired the name “China Clippers”.

Of “darker” note, “Opium Clippers” existed alongside The China Clippers as well. The Asian drug was quite popular in England (and unregulated). These Opium Ships brought in the drug to the Country quite regularly. The most famous of The Clipper Class of ships, was the American Clipper “Flying Cloud”. It held the World record for time in traversing the distance from New York (US) to San Francisco (US) in 89 days and 8 hours (Coast to Coast) and around South America in 1854. This record was held for over 100 years (being broken in 1989!). With the advent of more and more steam powered ships, Clippers began to become obsolete. This coupled with the construction of passage canals such as The Panama and Suez, would end their dominance. Many were regulated to Racing Ships (which was a popular sport in the late 19th and early 20th Centuries). Several Clippers have been preserved. One example is The British “Cutty Sark”, launched in 1869. She is now a Museum Ship berthed in Greenwich, England. 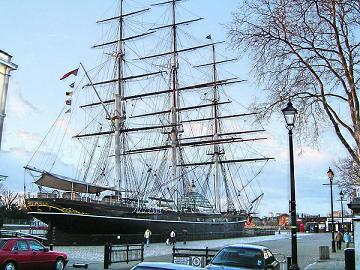