The nautical term ''Clinker'' is related to an early ship building technology which can be traced back to Ancient Egypt's Old Kingdom of 2,600 BC. Evolving thru to the 7th Century AD and many Norse Cultures, ''Clinking'' was the method of Hull construction by which wooden planking was placed (linear), end over end – with each subsequent ''end'' overlapping another. Another method was constructed by placing planking by width (again overhanging the plank above it). Once the basic pattern was placed, it was fastened via wooden dowel (pegs). The inside of the Hull construction was then pitched with tar, which when dried – created a waterproofed construct.

The overall downfall of Clinking was that the Hull was not truly streamlined and as such water drag was present. Also, the act of movement both in a turn to Bow or Stern as well as Reverse, was likewise impeded. In time, ship building would evolve into the more streamlined Hull construction with reinforced internal framing or ''skeleton''. Between the 14th and 18th Century AD – ''Clinker'' was also associated with the meaning of a ''cheaply built'' and ''small'' Craft. Such Clinkers were seen as fishing vessels and Harbor (Port) transport ships. In a few cases, Clinkers were also drafted into Harbor Defense Ships, with small 3-pound Pivot Guns. Clinkers could also be found on riverways, used again as transport shipping. 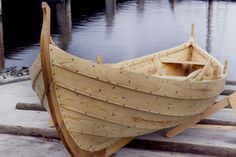