An Ancient Military Unit that was an offshoot of the iconic Cataphracts, or Heavy Cavalry - The Clibanari originally developed in Ancient Greece. Their name was translated to mean "Camp Oven Bearers", in reference to the Pot-like cooking containers that their Armor resembled. They would become the dominate form of Cavalry in many Central European Countries. Unlike the Cataphracts, Clibanarii were more heavily armored and equipped. Seen during the late Imperial Roman Period as well as the early Byzantine Empire, they would also become the dominate form of Sassanid (Persian) Cavalry from the 2nd to 4th Centuries AD. By the 5th Century, most Nations had developed a type of this Cavalry (still using the Title of "Clinanarii"). However, their heavy Armor had been replaced by lighter Lamellar. Their Warhorses lost their characteristic Skirt Plating, for increased speed and agility. Weapons used, were in accordance with their National "identity". Spears and Lances were favored, as were eventually Short Sword and Dagger. Shields were often optional. The demise of The Clinanarii came about with the advent of primitive Firearms and more importantly, early Artillery. 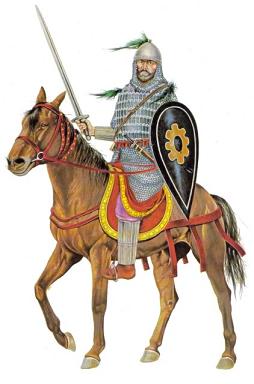