People in The Middle Ages, put a high value on cleanliness. Bathing was common. Although a more elaborate procedure for the wealthy, most people bathed regularly. Public Baths were common (especially in larger Cities).In some Regions, - curative powers were often associated with the using of a Public Mineral Bath. Perfumes were popular in Europe and The Middle East for the scents they created. (it is a common mistake that they did NOT use perfumes to mask BAD odors from lack of washing). As Trade brought more and more spices and perfumes from The East, more and more effective “local” manufacturing became established. Alcohol-based perfumes later in the 14th Century lasted longer and were more durable. Aniseed an Mint were used to freshen breath Teeth were cared for by spreading a base paste (of the same consistency as Modern toothpaste) – on a cloth or the same wrapped around a twig.

People would carefully “brush” their mouths. Oddly, the paste contained Calcium powder but was “thickened” with honey or sugar (which still caused tooth decay). Because Lice were a common feature of Medieval life, much time was spent in a family “delousing” one another. Hair Washing was another important factor in Medieval life. Men and women took great care and pride in their hair. Blonde hair was admired, and often great lengths (and tragedies!) followed attempts to make it so. Ash and wine mixtures (along with “everyone else's” recipe) – would often cause their hair to become white or gray prematurely. Vinegar was also used. Style and wear was often very important (to the wealthy). Often treated with olive oil, the natural “attraction” of lice, nits and other parasites were no doubt. Men with beards (as was a high fashion), would often wax their beards with special “softeners” and wrap them (overnight) – in what was called a “Beard Bag” (to keep them soft). Although The Church was strict on “facial hair”, most men still kept up with “fashion”.

Of course, the poor could not afford such “treatments” and would rely on the shears. Short hair was well seen (even with the rich). After all, “appearance” was everything in The Middle Ages. Women (again the wealthy), took many hours to make their hair their “treasure”. Combs constructed of scented woods, perfumes – and of course, elaborate hairpins and “trinkets” were placed, weaved and otherwise place into a woman's hair. Undone hair on a woman was looked at as a sign of illness or mourning. Not unlike today, Medieval women would shave off ALL facial hair (eyebrows especially) – and simply paint them on (or go without!). Both men and women would shave their front hairline as high as possible. This was to impart the image of a large forehead (a mark of intelligence). 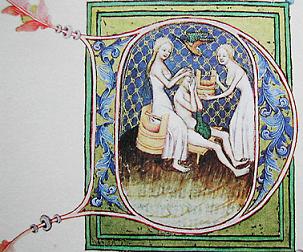