As we have seen, Trained Bands were an early attempt by Parliamentarian Forces to establish a Militia System of trained Civilians – who could be called forth (when needed), to either serve in Military Conflict or defend their local concerns. The of Kent, England was one such that provided a ''Trained Band'' for Parliamentarian Service in The Civil War. (22) Infantry and Cavalry Regiments were formed totaling over 4,000 Officer and Men. The Regiments were equipped with Armor, Musket, Pike and related ''Camp Goods'' and Horse. The Kent Band served from 1643 until 1645. The Flag used by The Kent Band consisted of a Field of Stripes – arranged with (4) Blue and (3) White. The Upper Left Canton featured The Red and White St. George Cross. 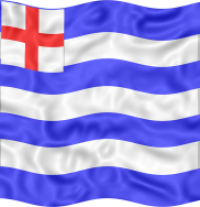