Initiated in 1354, by The City of Prague – King Charles IV (King of Bohemia) as well as The Holy Roman Emperor, ordered those persons living in “The Jewish Quarter” of Prague – to display this flag. Bright red, it featured a Yellow 6-pointed Star of David. Although allowed a simple “self-Administration” and moderate rights since 1264 – by Charles IV reign Jews HAD to display this flag prominently (or face a hefty fine). The Prague Flag could be considered the “first” of it's type (predating the current Israel National Flag by 800 years). 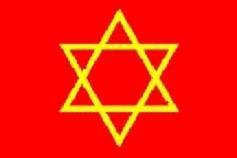