Washington DC – as Capital of The United States, was a prime target for Confederate Forces during The American Civil War of 1861-1865. It's capture would ensure immediate independence. As such, the need was critical for The Union Army to protect The Region. With Her Armies in The Field, the need to divert them for this task could not be spared. Hence, The Federal Government created a system of Defense called The ''Circle Forts''. The entirety of Washington's outskirts (then) were quite different than the Urban congestion of the day. In the 1860s, much of The Region was indeed miles of wilderness and fields (The District itself still had dirt roads in quantity). As a means of protecting all approaches to The District (not just those to The South – Virginia and Maryland), Forts were constructed.

The Forts were all earthen, with ramparts and parapets of varying height. No set construction style was chosen over another. The earthen walls were reinforced with hundreds of tons of cut wooden timbers. Many had constructed flooring and of course wooden barracks for the Garrison's assigned. The 68 Forts in fact help to deforest much of the once lush and full forests. In addition to The Forts, a series of 90-odd Battery (Artillery) emplacements were built, but these were seldom manned and often did not have Guns. These were to be used ''when needed'' – should a Confederate assault occur. These positions were often placed between the distances of The Forts.

Encircling The District, thousands of soldiers were deployed to The Circle Forts. Often, after a deployment of several months, Garrisons were ''rotated out'' to serve with Field Armies, replaced by recruits or ''Veteran'' Units. When African-American Soldiers were finally pressed into Federal Service in 1863, many of these Regiments were deployed to The Circle Fort System. The Forts also served the purpose of ''advanced'' Supply Depots which could support Field Armies operating in Virginia (Confederate Territory). None were ever actively engaged or captured by Confederate Forces. Very few have survived since the end of The War in 1865. 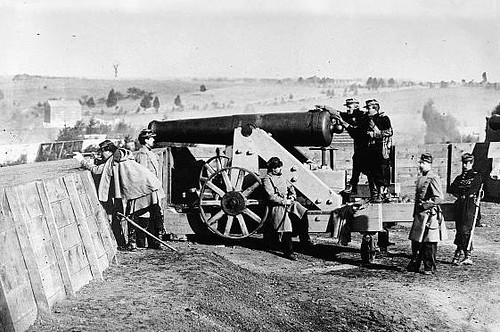