A “Chuck” Wagon, also known as a Sustenance Wagon – was a type of Field Kitchen used on The American Prairies of the 19th Century. A vital component of Cattle Drives, often the more “renowned” a Cook was (and how well apportioned his Wagon was) – was often a “deal breaker” when it came to recruiting the yearly Cattle Drovers needed to manage a Herd.
The tern “Chuck” is related to the wooden Box mounted on the back of a standard “Covered” Wagon, and had shelves to hold Cooking supplies. The large Box had a wide top that allowed a Cool prepare meals for Campfire. It was from this “Chuck Box”, the entire name of The Wagon was known. The first such “Chuck” Wagon was attributed to Texas Rancher Charles Goodnight, who wanted to provide quality food to his Workers in the 1850s. The idea caught on with other larger Ranch Owners.

It took a skilled Field Cook to manage enough food and supplies to feed as many as 100 Drovers or 50 Ranch Workers. Often “fresh” foods disappeared quickly at the start of a Herd Drive. Salted and pickled food was often the order of the day. Hopefully, if a Cow died during the Trip (which was common), fresh Meat was the order of the day. Beans, Cornmeal Bread, Rice (rarely) and of course – Potatoes were daily fare. Copious amounts of Coffee was always just a “Campfire” away. Chuck Wagons were often smaller than the traditional Covered Wagon, but were also much taller. Often only twin Horses were needed to move A Chuck Wagon. The Cook (and sometimes an Assistant or Apprentice) ran several miles behind the main Herd. A “hearty” meal could be prepared in less than 2-hours. Early in a Drive, such “treats” as Peach Cobbler and Apple Pie were welcomed pleasures to some Companies.

Of course, Stews and the Trail favorite Chili and Beans were often the Main Course for some. Chuck Wagons often maintained hot Coffee through the Night (when Drives were on a timed schedule with Drover Shifts). The basic “Chuck Wagon” was a design more closely linked to Military Mess Wagons – which provided “hot” meals to Soldiers as early as the 1850 in Europe. Today, Chuck Wagons are a feature of “Chuck Wagon Races” in some Western Communities. Reproduction Wagons and Teams Race for time and bragging rights. These Races also feature Chili “Cook Offs”, to see who can produce the most authentic (and hot) fare. The Chuck Wagon is truly a feature of the by-gone Era of The American West. 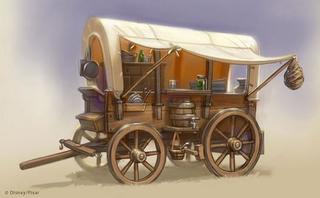