Another of the The Middle Ages writing styles, “The Chronicle” (like The Annals), described important Events with a Kingdom. The difference was in the detail. Chronicles were often much more detailed than an “Annal” with regards to persons, places and events. Originally designed to show the proper “sequence” of events from “The Creation” forward (due to Church influence), The Chronicle would gradually evolve to center around a Rulers Reign (and his issue), as well as detail battle analysis, etc. One of the earliest surviving Chronicles is Serveus' “World Chronicle” of the 3rd Century A.D. Most later Chronicles (that survived) would provide a detailed picture into the life of Royalty and Nobility alike. They were often written in “the Third Person” style. 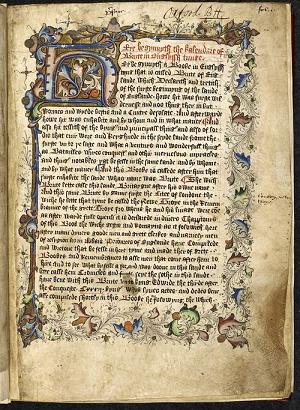