Christine de Pisan was unique for a woman of The Middle Ages. Born in 1364 (Venice, Italy), she was Daughter to The Court Astrologist to King Charles V (France). Allowed to freely associate with Courtiers and Diplomats, Christine quickly developed an Academic “outlook”. She was allowed to read and study (often with The Royal Children). This was a rare thing for the typical Medieval woman (who generally was not seen as needing to be “educated”). Married in 1370, she loss her husband early to War. Having 3 young children and no support – Christine had to do something. As a way of coping with her struggles, Christine wrote. She wrote commentaries on The Bible, books she had access to (and so on). Christine even was the “unofficial” Biographer of King Charles V! She finally received her most praise (and money) – from her published work called “Roman De La Rose”. This book chronicled the life of a “typical” Medieval woman. It was a huge success (even more odd that it was written by a woman AND published). It was in no small part to Christine's “Noble influences” (perhaps even done partly to SEE what would happen!). Following this small “victory” for “early” Rights – Christine published a well received Poem on “The Life of Joan of Arc. Both of her books were translated into several languages Worldwide. Dying in 1429, Christine Pisan is considered on 1 of 3 “known and declared” Female Author's of The Middle Ages. 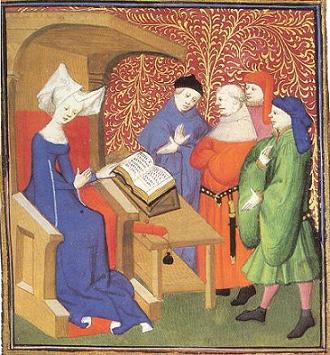