Much like The Greek Chiton, The Chlamys was a form of general clothing – worn mostly by Greek Military. First seen in use around the 2nd Century BC, it’s form would last (in part), until the 12th Century AD. In addition to it’s Military usage, The Chlamys became part of Greet Royalty’s couture. Designed to be a seamless, one-piece rectangular component, The Chlamys was made initially of wool. It was not as long as The Chiton, but featured the elongated, over the shoulder extension that was gather up and worn over the arm. In Military use, this draping could also serve as a form of “light” Shield.

Light Infantry favored The Chlamys due to it’s obvious range of motion that was provided. It was not generally worn with Heavy Infantry, due to the use of Linothorax Chest Armor. Examples would be adopted into The Byzantine Culture. Although used mostly by Nobility and Royalty. The Chlamys was not intended for Female use, and coloring (dying) was normally White (although later brighter colors were used). The Chlamys was also used by the emerging Class of Merchant (Middle Class) Society. 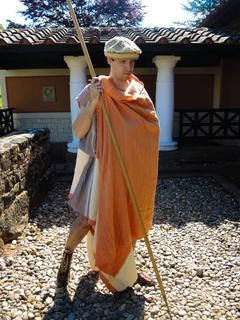