Developed and deployed at the time of China’s ‘’Three Kingdoms’’ Period (2nd Century BC), The Han Dynasty’s ‘’White Horse’’ Cavalry (or ‘’Righteous White Horse Volunteers’’), were some of the best Light Horse Cavalry of their Era. So named for the fact that all Warriors were mounted on white horse’s, they numbered over 3,000-men at the height of their deployment. Although adept Horse Archer’s, The ‘’White Horse’’ were better known for their use of The Paodao Pole Arm. The Head of the weapon was slightly modified. Normally, these weapons ranged from 6 to 8 feet in length and were ideal as Cavalry armaments. The ‘’White Horse’’ used brightly colored lamellar armor, which made them not only ‘’stand out’’ to their Enemy, but made them more easily identifiable to their Commanders.

The ''White Horse'' was also noted for the ''lightness'' of their Horse's armor. Unlike many Cavalry of their day, The Troop used very little armor for their steeds, as this was thought to ''slow down'' their movements. Noted ‘’Shock Troops’’, The ‘’White Horse’’ were also adept as Front Line Infantry, and were often deployed as such. Brave and merciless, they were a Force to not be taken lightly. Many of the Troop were taken from young Aristocracy within The Han Dynasty. It was considered a great honor to serve. Promotion was achieved through feats of bravery on the field of battle. Often this led to very high attrition rates among their ranks. Many of those who were appointed thru the Ranks this way would eventually rise to the status of General. Most of these Officers were trusted men to The Han Emperor. With many factions battling for supremacy over China, The Han would eventually yield and with them so too did The ‘’White Horse’’ fade into History. 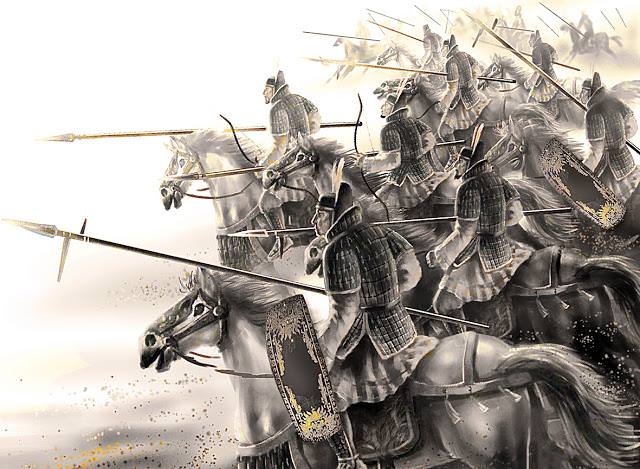