Possibly older than the 9th Century (by Chinese Historical accounts), the first rocket designed as a weapon was a Chinese invention. In their crude beginnings, these rockets were constructed of bamboo wood and stabilized by a guiding stick or rod that was constructed and attached to the underside of the device. By lighting the device (via a fuse), the rocket would fire off at it's target. Early problems with accurate targeting was well known. Often, multiple rockets fired at a specific target (mass envelopment) was the only way to fix this problem. Initially, later versions of these rocket systems ranged from 600 to 2,000 yards. By the 14th  Century, a “multi-staged” war rocket was developed – which increased range up to 2,500 yards!. The Chinese also pioneered the use of Multiple Staged Rocket Platform Systems. These wooden “Fire Boxes”, featured up to 50 pre-primed rockets that would be fired simultaneously. These systems would give rise to the inventions of both The Mysorean and Congreve Rocket Systems. 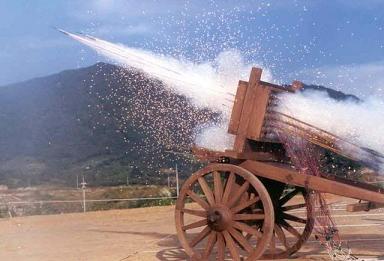