Formed at the very beginnings of The Tang Empire (around the 6th Century AD) – The Imperial Body Guards of The Tang Emperors were considered Elite. They were taken from Nobility (Sons) and often were chosen for their physical appearance and martial skills. Originally numbering 30,000, they would at one point be increased to 200,000. In addition to being in charge of protection for The Emperor as His ''personal Troops'', The Guard protected The Capital (Taiyuan) and all Residences and Palaces throughout The Empire. Another portion of The Guard were assigned to Frontier (Border Duties).

Skilled Archers and Swordsmen, The Guard (sometimes referred to as The ''Forbidden Guard''), were broken down into various Units. Names such as ''The Feathered Forest'', ''Dragon Martial'' and ''Divine Martial'' were used to identify them. Unlike other Forces (conscripted), The Guards were not paid with land. The Guard used Plated Lamellar Armor, skirted into layers – which covered their entire body, down to the ankles. They wore Gambeson type ''under armor'' as an additional layer of protection.

In time, with other Emperor's mishandling of The Empire (leading to the gradual decline of The Tang), less and less Nobility served within The Guard ranks. More ''Commoners'' were recruited and were not as professional. By the 9th Century AD – The Tang Imperial Guard were disbanded. 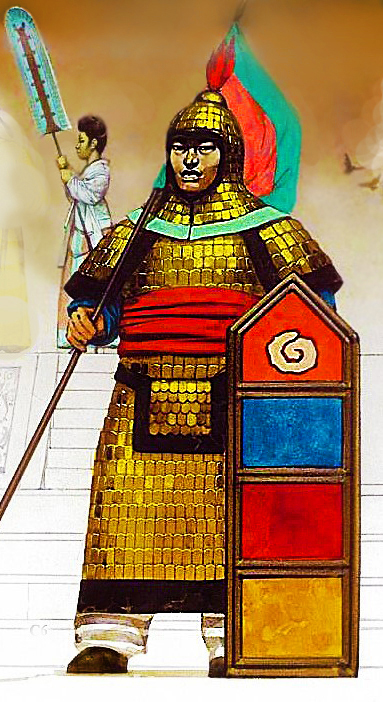