The Qin Dynasty occupied much of Ancient China from the 2nd Century BC. The 15 years of Imperial Qin control was seen by Historians as one of the shortest. Mismanagement of land and farming, as well as lessening the intake of Nobility taxes from their Peasants, would erode The Qin. Their Military was the a ''snapshop'' of ''micro-management''. Despite these impediments, The Qin had a very detailed, well armed and armored Army. The Qin adopted The Zhou Warfare Stle of The Chariot, and refined it by longer and better controlled vehicles. The Crossbow was also re-designed.

The constant threat from other Dynastic Warlord and the ever present attacks from The Mogols, who hav The Zhou Emperor to begin a series of reinforced perimeter walls and defensive structures. In time, these walls would become The Great Wall (still in existence today). Much is also know of Qion Armor and weapons, thanks to Emperor Qin Shi Huang. In order to protect His ''person'' in death – He commissioned a mock army made of Terracotta. Each ''soldier'' is unique from the other and each carries hyper resalistic (and in some cases real) ''weapons''. The 5,000 Statue Army was buried with The Emperor. The Qin used copious amounts of small Plate Lamellar which extended to just above the ankle. Helmets were used. The primary weapons was Sword, Spear and various Ranged Weapons. 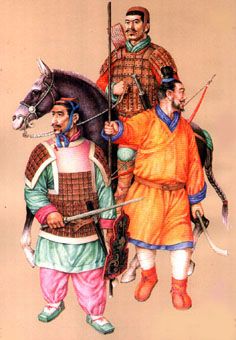