Seen in use in Ancient China around the 5th Century AD – a ''Qianli Chaun'' was a type of ''Paddle Wheeled'' Boat used to ferry passengers and cargo across Lakes and Rivers. In Wartime, The Qianli Chuan could be pressed into Military Service as Troop Transport. Unlike their future ''Cousins'' in America, these Paddle Wheelers used no steam for propulsion. ''Humans'' were needed to actually turn the massive wooden wheels which featured the paddles (spinning in the water). It is unclear if Slaves or actual paid Workers accomplished this extremely physical labor.

Typically between 75 to 150-feet in length, The Ship was wooden. A low draught, no Structures were built into The Deck (although Awnings were placed for The Sun). Passengers were expected to sit on The Decks with cargo. Royalty and Nobility would have their own personal Qianli Chaun for ''private use''. Several Contemporary Chinese Sources state that during Wartime, Qianli were used as a type of ''Gunboat'' or ''Rifle Platform''. Variants would continue well into the 20th Century (but by this time they were Steam and later Diesel Engine driven). 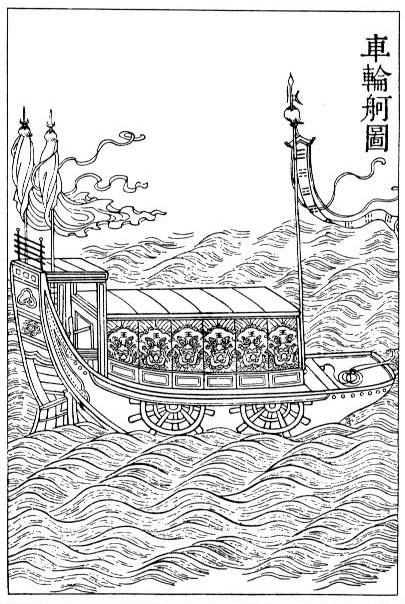