Seen in uses around the 13th Century, The Podao was known as “The Leg Cutter”. Known to have been used by infantry, it's name may have implied that it was used to cut and injury the legs of enemy horses (during a charge). The weapon featured a knife-like single-edged blade (around 12 to 15 inches) and attached to a 6 to 8 foot wooden pole. The weapons weighed around 6 pounds. The Podao was often issued to less trained soldiers and is considered a “melee weapon”. 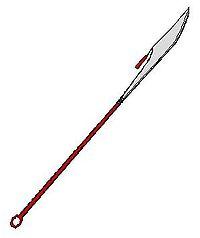