Classed in The Broadsword and Saber Families, The Niuweidao Sword was also known as “The Ox Tail Sword”, so noted for it's handle's resemblance to the animal's tail. The blade was a broad tapered blade (often being confused with The Arabian Scimitar). The blade was roughly 24 to 30 inches long ans single-edged. The weapons weighed around 2.5 pounds. The upper portion of the blade flatten outward somewhat, again similar to many Middle Eastern blades – of which may have influenced it's design. Popular as a military sword in the 13th to 16th Centuries, this blade sometimes was used with a scabbard. A simple rounded hand guard plate protected the user's hand. 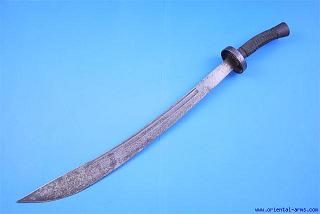