Seen in the 14th Century, The Meteor Hammer was an ingenious defense weapon. Requiring skill and training to master, the weapon consisted of 2 weighted Mace-like balls (mad of steel, bronze or iron). Often these heads featured spikes or related protrusions. The Heads were joined by a length of chain roughly 6 to 8 feet long. The heads themselves weighed around 5 to 8 pounds. In theory, the user would use an elaborate spinning technique creating a pattern. Once a target was established, The Meteor could be thrown as a single weapon or used as a steel whip to hit an attacker. Some models were made specifically with one Mace head. The Meteor Hammer was obviously an effective weapon against cavalry (especially horses). The Meteor technique involved 5 uses: Throw, Grab, Whip, Slam and Swing. It's drawback was in the time it took to properly train and use in combat. 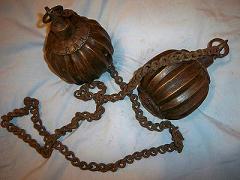