Possibly the first in Ancient Chinese War Armor development (around 260 B.C.), “Stone Armor” is actually composed of just that – rock. These suits were very time consuming to make and involved many workers and craftsmen. The basic suit design was composed of 6 leather cut patterns. The patterns consisted of a Front Breastplate, Rear Plate, Front and Back Skirts and two Shoulder Guards. Once cut, the craftsmen began to cut and shape small pieces of Limestone into scale plates. Each scale was cut to the dimensions of 2x2.5 inches. Small holes were likewise drilled into the stone. Each stone was placed in a Lamellar pattern and affixed to each other (and the leather padding), by bronze wiring. A suit could weigh upwards of 60-pounds (more for versions that had longer skirt front). Limestone suit were very strong and resistant to sword blows. Helmets were made in a similar pattern, using a wooden “skeleton” as a base with the scaling applied in a similar fashion. The entirety of the Wearer's head was covered, with a facial opening and flanged (attached) cowl. Whole Imperial Armies were outfitted in these suits. 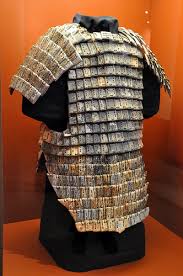