Designed in the 11th/12th Centuries in The Song Dynasty, The Huochong was one of China's first hand cannons. Similar to the European Bombard, the device was originally Bamboo wood. The orginal version was roughly 2 feet long. The obvious problems with this was that accidental explosions would kill the shooter. The bronze version (at 1.5 feet long) was much better suited. Looking similar to a miniature cannon, it was held in the hands. Pre-loaded with 2-pound shot, a slow match would be applied to the rear vent. Aiming, the shot would fire. The Huochong had an unusually effective range of 25 to 35 yards (impressive for The Era). It drawback was it's weight, which meany that only the hardiest of Warriors could deploy them. Experiments with early versions to feature crude carriage systems would develop out of this dilemma. 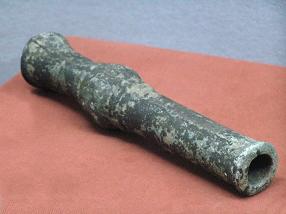