Developed in The Han Dynasty (2nd Century), The Guandao was a Pole Arm weapon. Known as the “Reclining Moon Blade”, it featured a blade head roughly 2 feet long. Curved and single-edged, the cutting portion was beveled upwards. Some blades featured an extended hook notch on the opposite end (base) of the blade head. This device was mounted on a 5 to 6 foot wooden pole (with a sharpened Spike at the end). Originally designed as a hunting weapon (sharp enough to carve through an Elephant's spine), it became a melee weapon during many of The Han Dynasty Border Wars.

The Guandao was also referred to The Dragon's Blade. It is among the most recognized of ancient Chinese weapons. The weapon was quite heavy at 8 to 10 pounds (with several documented at 20 pounds!). It was used by both infantry and cavalry. Techniques for use involve a spinning/slashing motion designed to inflict a wide arc of damage. 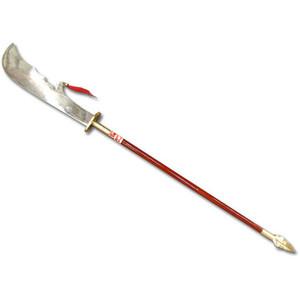