Deployed in 2012, The People's Liberation Army's (China) Harbin Z-19 is a Light Support Attack and Scout Helicopter. Based on The French Eurocopter ''Dauphin'' Series of Military Helicopters, The Z-19 carries some of the most sophisticated electronics systems currently used by The Chinese Military. Over 186 have thus far been deployed with The Army. This Model is not available for export. Crewed by (2), The Z-19 is 40-feet in length with a dual Rotor radius of 40-feet. Powered by (2) WX-8C Turboshafts, over 940-HP (each) is produced. An estimated airspeed of 170-mph can be achieved. Operational ceiling is over 19,000-feet. Armament varies, but The Z-19 deployment favor Air to Air and Air to Ground Rocket and Missile Packages of a variety. 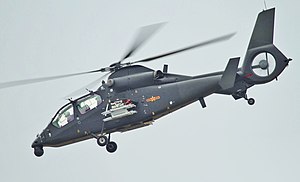