The Chinese Han Dynasty reigned from 202 BC until 220 AD. They maintained a semi-professional Military Force (at it's height) of 150,000 Men. The Han also used Conscripted (local) Forces and hired Mercenaries when needed. The Army was broken down into (4) components. The Northern, Southern, Eastern and Western. The Northern Han Army was the ''Standing'' Army of professional Officers and Men and the most well equipped and trained. The Southern Han Army was mostly Conscripts with a much smaller Professional Force. The Eastern Army – while primarily Infantry – were more akin to ''Naval Land Forces'') – protecting The Coast and operating The Han Navy. They were tasked against the infamous Japanese Wokou Pirates. Finally, The Western Han Army was basically hired Mercenaries.

Within The Northern Army, the primary ''Soldier'' was a Shield Bearer. These were ''Melee Troops'' who were lightly Armored Forces who wore a type of quilted Breastplate. They carried a Shield and usually a Sword. They were arranged in Groups of (10) Ranks, (9) ''deep'' (roughly 100). Their goal was to absorb an Enemies initial assault. The remaining Shield Bearers would then support more elite Spearmen or Cavalry in their counter-attack. 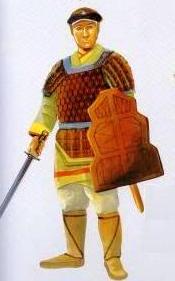